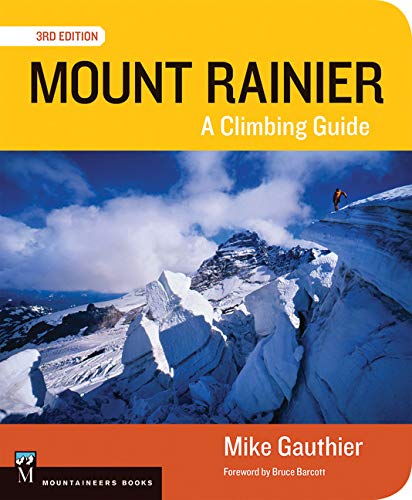 • 40 principal routes and their variations, with aerial photos and route overlays

• Now with full-color photos and maps

Many of the most accomplished US alpinists have learned their skills on Mount Rainier. And many of the rest of us dream of one day standing on its majestic summit. Whether you’re one of these dreamers or an aspiring pro, you need this book, written by Mike Gauthier, the park’s former lead climbing ranger.

This new, 3rd edition is a major upgrade of the bestselling guidebook, which remains a standard for other climbing guides. New features include an expanded section on glaciers, including how to understand and traverse them, as well as new information on search-and-rescue and additional historical details. Gauthier has also added beta on all major ski routes, as this sport has become a favorite on the mountain.

Mount Rainier reigns as the single resource, packed with everything you need to climb the mountain, from your first time to your fifth: tips on selecting a guide service; nearby training sites to help prepare you; detailed beta on the 40 principle climbing routes; overviews of park flora and fauna; capsule histories of ascents and accidents; overviews of the major park regions; bonus routes to several other peaks inside Mount Rainier National Park; and much more.

EXCERPTED FROM THE INTRODUCTION

It’s rare that I’m hunkered down in a tempest on Mount Rainier’s summit these days, but that was often the case for a period of my life. For nearly two decades, a majority of my time, energy, and passion was directed toward climbing up, and snowboarding down, as many of the routes as possible on Mount Rainier—always with a camera in tow. For me as a National Park Service climbing ranger, it was important to intimately know the mountain’s hidden terrain and unique features beyond the standard routes.

It is my sincere hope that this guidebook opens the doors of Mount Rainier’s upper slopes and summit to you. May the sights, sounds, feelings, and smells of its meadows, glaciers, summit winds, and freshly fallen snow become part of your adventures and memories. May these experiences replay in your life as a reminder of magnificence, grandeur, and respite—as a memory of something really wonderful and awesome and special—because that is what Mount Rainier is.

Training for Climbing: The Definitive Guide to Improving Your Performance (How To Climb Series)